“ On August 4th, 2020, there was a large explosion in the port of Beirut. Half the city of Beirut was destroyed, around 300,000 people are homeless. 5,000 were injured, but there are a few more injured because of the unrest and protests against the government .

The hospital infrastructure is completely overwhelmed. Beirut Airport has been damaged, but planes land daily. International aid is already working.

The humanitarian needs are enormous. … It’s about water, … medical care for the injured.

Can we help? I do not think so. This help is already running. We Rotarians cannot get a move right away. But I think that there is an important task for Rotary to help the hospitals … “

We have set up an account where we are now collecting donations . As soon as there are projects, the Foundation Committee under Ralf Peters (RC Klosterneuburg) together with the Community Service Chair Thomas Wimpissinger (RC Vienna-Albertina) with clubs in Lebanon , Switzerland and Germany – we will report.

Deductibility of donations:
1. For individual donations please add the date of birth to the name .
2. If clubs do not transfer money from the cash register, but collect money in the club, please send a list of donors with their date of birth and signature to the Rotary Project Association for the collective transfer : Chairman: Josef Leutgeb josef.leutgeb@agl.at (RC Klosterneuburg)

The last seconds of the Beirut Fire Fighters

It is shortly before 6 p.m. on Tuesday evening in Beirut when Sahar Fares and ten men march north of the city. The firefighters are still discussing the best way to approach the flames. When the first fire broke out in the port, 12 young volunteers from the Beirut Fire Fighters were immediately ordered to the site. They reported that the situation was worse than expected, then the main explosion occurred and the young men came to life.

Virtually all equipment belonging to the Beirut Fire Fighters was destroyed in the explosion. It is easy to imagine that there will be another catastrophe in the next fire in Beirut if the fire brigade has no equipment.

The RC Tripoli Cosmopolis is leading this project.

HansjĂ¶rg Eberle from RC Geneve International will make a video appointment with the fire brigade commander and RC Tripoli Cosmopolis for further clarification.

He is already looking at material lists that the fire brigade commander has already sent him. The financial requirement is very high if fire fighting vehicles also have to be procured. But there is also a need for small equipment, uniforms, pumps – it does not necessarily take millions to generate benefits.

This project also has the potential for interested Rotarians with ties to the local fire department to campaign for the mobilization of used equipment. 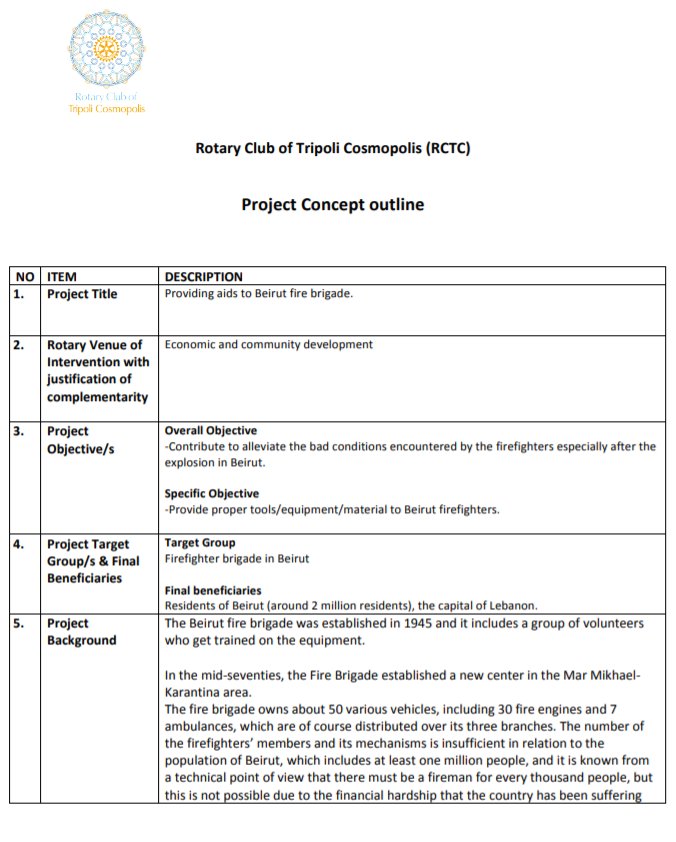 Before the explosion, the Rosary Sisters’ hospital had 200 beds, modern research laboratories and operating theaters, spread over a total of 18 floors. 80 doctors and 92 nurses worked here. At the moment everything has been reduced. Nursing Director Sister Clotilde reports that many nurses have been traumatized, some were injured in the blast and Jacqueline, a 60-year-old nurse, was killed. A portrait in the entrance area of the hospital with a burning candle in front of it reminds of her.

Currently only two floors are still functional. One of the elevators could be repaired to take the patients to the operating room. An outpatient clinic for corona tests has also been set up. The nuns run the clinic, work on the wards and are also there for the patients in pastoral care. â€śWithout them, the hospital wouldn’t be what it is. They are the source of strength in our work, â€ťsays Maron Rabash, who has worked here as an anesthetist for 28 years. â€śThis hospital with its Christian character is urgently needed in Beirut. Many patients come here because they know that they are being treated according to ethical values. “

Through our community assessment visits, interviews, and meetings with the on-site engineers, we were able to set the urgent priorities the hospital needs to get back up and running.

Reconstruction of the Pediatric Unit in Karantina Hospital

The Assameh Birth and Beyond Pediatric Unit in Karantina Hospital, which had a specialized unit treating newborns who require critical care, was completely destroyed.

This project is led by the Rotary Club de Beyrouth , with the support of RC Tripoli Cosmopolis .

We are currently putting together projects with the three Swiss districts and the Germany-Lebanon Country Committee (ICC) to support our Rotarian friends.

A quick rundown of the cost of medical equipment and structural restoration:

Rotary clubs from Egypt are distributing aid kits in Beirut

On August 30, 2020, an Egyptian transport plane filled with aid packages (medicine, clothing, food) landed in Beirut. Rotarians from Egypt also flew in to distribute everything together with the Rotary clubs from Beirut.

Information from HansjĂ¶rg Eberle from yesterday:

I am coordinating the Rotary operation in Lebanon in two directions:
1-As I preside the Lebanon Country Chair, I oversee the bank account.
-On another side 25000$ will be added to the account as 28 RCs contributions to the operation in favour of the people of Lebanon.
-Meetings to coordinates:
*Media platform
Website
Videos
*Medical equipments
*Sanitizer for COVID1O and Hygiene.
*Foodboxes for distribution to family in needs.
2-as DRFC chair I am coordinating for a GG with the participation of different Districts.

Thank you for your patience and support.

Aid delivery from Bahrain (seat of the district governor)

The district governor for Lebanon, Mazen Alumran, is based in Bahrain. A delegation flew with the relief supplies to Beirut and shot this documentary video.